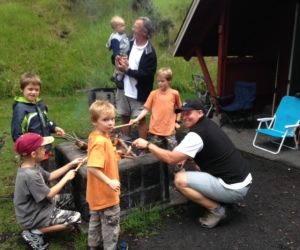 Boys and fire. We brought our neighbor, Phil, along and sure were thankful for the extra hands!

A few weeks ago we took a camping trip to Volcano National Park.  I know I’ve posted about our adventures there before (here and here) but the great thing about active volcanoes is that they’re never the same!  Also, this time we had a One-Year-Old along and that makes for an entirely different kind of adventure. Active volcanoes and active toddlers are really a lot alike.  They both require constant monitoring.  But even under the closest of supervision there is really very little one can do to prepare for their next outburst.  You are simply at their mercy. Here on the Big Island our thoughts are all with the residents of Pahoa where an active lava flow has arrived at their back door and already destroyed some structures.  The flow started back in June and they’ve been able to predict it’s course pretty well but like a stubborn, determined child there’s nothing you can do to stop it from destroying whatever lies in it’s path.  It WILL have it’s own way. 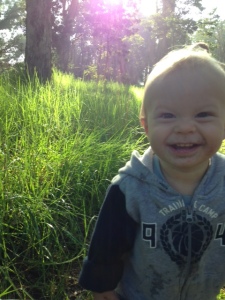 Anyway, about the camping trip;  Phil, Tom, and the boys brought tents but Gideon and I opted for the luxury of an A-frame with a real roof and bed and that’s about it.  Sometime during the rather rainy night a few more boys fled their soggy tent and joined us but little Sam was a real trooper and stayed cuddled up next to Dad till morning.  Besides puddles in the tents there were plenty more outside for Gideon to splash around in! 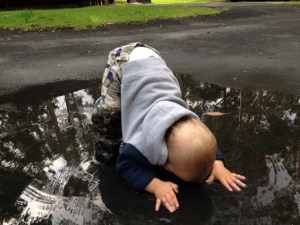 And just as an aside, if for some reason you’re heading out on a camping trip and not a single store in town has hot-dog roasting sticks or wire hangers to make them out of here’s a tip:  a two-pack of fly swatters is only a buck.  Just clip the plastic part off and voila! 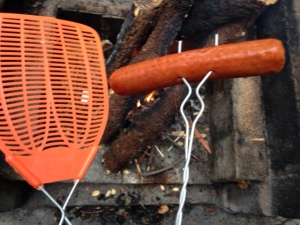 Anyway, a couple weeks later with Hurricane Ana bearing down on our island we thought, “What better place to ride out a storm than the edge of a volcano?”  This time, Tom’s folks were able to score us accommodations at the Kilauea Military Camp.  Since schools were all canceled Tom had an extra day off so we left early to get ahead of the wind and rain. 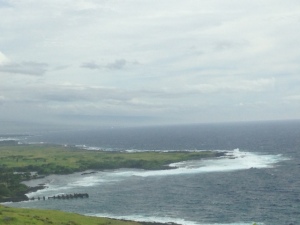 We hit the first outer band of Ana around South Point but by the time we got up to the park it was clear again.  Which was kind of funny because the whole National Park was closed because of the storm.  They let us through the gate anyway because we were the only ones silly enough not to have cancelled our reservations and we ended up having the whole Volcano to ourselves that entire day. 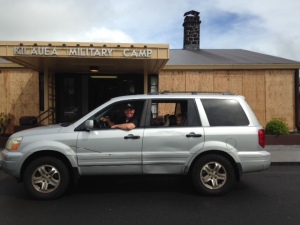 The lobby was all boarded up for the storm but they left us to fend for ourselves in a cottage.

The rain hit that evening just as we were eating our microwaved dinner outside at the picnic table. 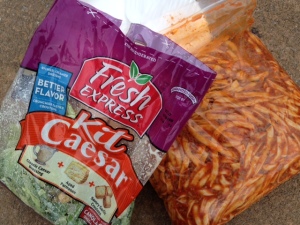 It didn’t stop until 36 hours later.  Rumor has it we got the most rain of any other place in Hawaii.  A good 12 inches at least.  But we had chosen our shelter well and for the first time in over three years enjoyed family time around a real live fireplace with actual fire in it.  We played games while Gideon ran off with the pieces, drank hot chocolate and generally enjoyed all the things you Main-Landers will get to experience for the next  6 months.  My hopelessly generous sister even sent a big box of pumpkin goodies to enjoy.  It was Fall in a box. 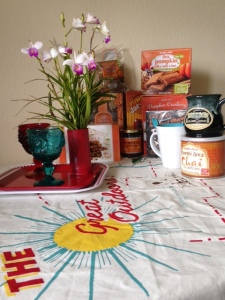 Pumpkin treats from my sister, vintage table-cloth from my mom, red bamboo vase hand-crafted by Titus, and wild orchids from The Creator Himself. Must be my birthday.

Our last day there, I rose at dawn to catch the last little bit of lava glow.  The rain was petering out and by mid-morning all was loveliness again.

Toddlers are like hurricanes.  Completely unpredictable.  You can’t ever know for certain exactly where they will hit.  Or with what fury.  THIS time we were spared. Next time, who knows?

7 thoughts on “Forces of Nature: Volcanoes, Hurricanes, and One-Year-Olds”

Leave a Reply to i have no greater joy Cancel reply

“Where there are no oxen, the manger is clean…” Proverbs 14:4

Okay all you Christians who claim to be taking the moral high ground by not voting for Trump. Listen to the #SOTU2020 he gave tonight and then know this. Not voting for Trump means voting AGAINST every single thing you hear in that speech. Look at the posture of the left. They literally HATE everything that is good and true and beautiful and if they win they will make sure it is the last time a Christian voice is heard in this country ever! #SOTU #SOTU2020 #stateoftheunionaddress #nancysworstdayever #christianvote #endabortionnow #prolife #avoteagainsttrumpisavoteagainstlife
@racheewaychee brought me this great coffee mug from the #womeninapologetics conference which I missed because of #g32020. I’m finding it pairs perfectly with biscotti and the current @haveyouhadyoursouptoday book club read. Which also happens to pair well with my bedroom rug. #apologetics #momsinherroomwiththedoorlocked #mamabearapologetics #sheologiansbookclub #howiusemyworthlessphilosophydegree
I wrote this poem over 5 years ago when our church in Hawaii did away with their “traditional” service. For the whole sad story and a recap of the G3 conference on worship click on the link to the Godmadeknown blog in my bio. #moretothisstory #g32020 #hymnody #psalmody #hymns #worship #reformedtheology #hawaii #elderabuse #poetry
I hear it’s very important for Christians to diversify their personal libraries. So I just went through our theology section to make sure we had one of every color and letter of the alphabet. I feel very good about this. Really almost virtuous. #bywhatstandard #erlcshmerlc #g32020 #thankyoug3formorefreebooks #reformedtheology #tollelege #diversity #wokelibraryshmokelibrary
Post #g32020 reading. John MacArthur highly recommended this book during the Q and A so I ordered it as soon as I got home. #worship #michaelreeves #trinitarian #johnmacarthur #mustreads #reformedtheology
My final take-away from #g32020