A dear reader with four little guys of her own (you can see them all here at www.storiesofourboys..com) just asked for tips on how to make school fun for boys.  Perfect timing because I just happened to score big on the fun factor today.  I’ve become more and more convinced that school shouldn’t be so much of a burden for them (or for me) and if it becomes so, some changes may be in order.  Here is an example of the kind of “change” I mean. 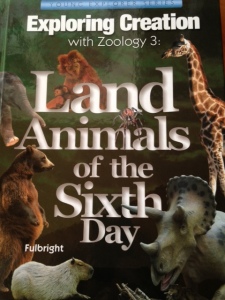 This is our Apologia science text which I read aloud to all the boys and which we all love just as much as we have loved Apologia “Flying Creatures of the Fifth Day” and the Apologia “Astronomy” books and probably as much as we would have loved their Botany and Geology books when we were studying those topics if my wonderful sister-in-law over at easygoingorganizer.com would have only introduced us to them sooner.

This is the assignment at the end of the chapter which involved hiding M&M’s in a laundry basket full of torn up pieces of construction paper in order to illustrate the usefulness of camouflage for both predators and their prey.  Since all my laundry baskets were occupied with holding laundry and I didn’t happen to have enough construction paper to coordinate with the stale M&M’s that had been in my freezer since, I don’t know, last year’s post-Halloween clearance sale, and since I knew my boys weren’t about to cooperate with recording their findings on a neat little scientific experiment chart I through caution to the wind and broke out the stockpile of Jello I had saved up for emergencies just like this.  Unlike the construction paper, I DID have enough Jello flavors to coordinate with the M&M’s.  In fact I had enough of both to make a bowl of Jello and with 10 “camouflaged” M&M’s for each of the boys in their chosen “school color.”  I also had a whole bowl of whipped cream that was intended to go on the pumpkin pie which I was supposed to make yesterday and never got around to so I piled that on as well. Right after nap-time (you can’t do this kind of thing BEFORE nap-time or you won’t have one at all) I herded them all out to the lawn where we were in close proximity to the hose and gave them a science lesson that went about like this (I won’t type the boys responses, just imagine they’re getting them all right): “Remember the picture in our science book of the tiger and the bunny?  Which was the predator and which was the prey? Why did God give the tiger stripes?  Why did God make the bunny small and brown and fast?  Well, today you get to be predators again and instead of bunnies you are going to hunt for M&M’s!  Only they are camouflaged in this Jello and you have to find them!  What do you mean “Where are our spoons?”  You’re predators!  Predators don’t need spoons! Now find those M&M’s!” 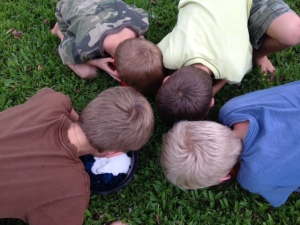 Predators on the hunt. 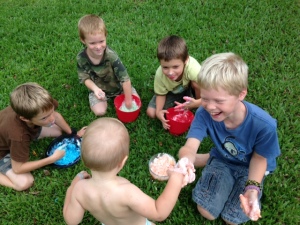 I finally let them cheat and use their hands and then Gideon wanted in on the action.

I think this kind of Mad Science may have been a bit much for him. Especially when they started throwing the stuff. 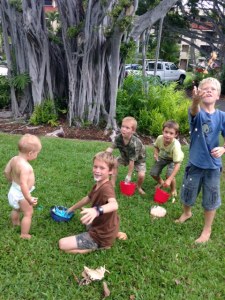 But lesson learned.  And thank goodness we had that hose handy.  And if you’re looking for ways to make anything fun, just add Jello.

“Where there are no oxen, the manger is clean…” Proverbs 14:4

Okay all you Christians who claim to be taking the moral high ground by not voting for Trump. Listen to the #SOTU2020 he gave tonight and then know this. Not voting for Trump means voting AGAINST every single thing you hear in that speech. Look at the posture of the left. They literally HATE everything that is good and true and beautiful and if they win they will make sure it is the last time a Christian voice is heard in this country ever! #SOTU #SOTU2020 #stateoftheunionaddress #nancysworstdayever #christianvote #endabortionnow #prolife #avoteagainsttrumpisavoteagainstlife
@racheewaychee brought me this great coffee mug from the #womeninapologetics conference which I missed because of #g32020. I’m finding it pairs perfectly with biscotti and the current @haveyouhadyoursouptoday book club read. Which also happens to pair well with my bedroom rug. #apologetics #momsinherroomwiththedoorlocked #mamabearapologetics #sheologiansbookclub #howiusemyworthlessphilosophydegree
I wrote this poem over 5 years ago when our church in Hawaii did away with their “traditional” service. For the whole sad story and a recap of the G3 conference on worship click on the link to the Godmadeknown blog in my bio. #moretothisstory #g32020 #hymnody #psalmody #hymns #worship #reformedtheology #hawaii #elderabuse #poetry
I hear it’s very important for Christians to diversify their personal libraries. So I just went through our theology section to make sure we had one of every color and letter of the alphabet. I feel very good about this. Really almost virtuous. #bywhatstandard #erlcshmerlc #g32020 #thankyoug3formorefreebooks #reformedtheology #tollelege #diversity #wokelibraryshmokelibrary
Post #g32020 reading. John MacArthur highly recommended this book during the Q and A so I ordered it as soon as I got home. #worship #michaelreeves #trinitarian #johnmacarthur #mustreads #reformedtheology
My final take-away from #g32020